November 11 is Remembrance Day.  On this day the 11th day of the 11th month at the 11th hour we pay tribute to the men and women who have served and continue to serve our country during times of war, conflict and peace.

Remembrance Day is a day for all Canadians to remember the men and women who served and sacrificed for our country. It is a day we encourage every individual, young and old, to pause, to give thanks and to remember.

This year celebrates the 150 birthday of Lieutenant Colonel John McCrae.  John was born November 30, 1872 in Guelph and Guelph is honouring his contributions as a doctor, soldier, teacher and poet.  He is best known as the author of “In Flanders Fields”.  He was first a member of the Queen’s Own Rifles.  On graduation from medical school he practiced in Montreal and was a lecturer in pathology at McGill University.    When WWI broke out he enlisted as a medical officer.  He penned In Flanders Fields during the ballet of Ypres, Belgium in the Spring of 1915.  The poem was published anonymously in December 1915 in England and quickly became popular.  John McCrae was later credited as the author.  He planned it as a recollection on death and a call to arms. The poem was used to sell war bonds, recruit soldiers and commemorate the fallen.  It enshrined the poppy as a symbol of grief and loss and today the poppy is part of the Canadian Tradition of Remembrance. Since 1921, the Poppy has stood as a national symbol of Remembrance. The Poppy is also the recognized symbol for the Legion’s Poppy Campaign, which raises funds to support Veterans and their dependents.  The Legion sells over 20 million poppies as part of this campaign and over $20 million is returned to help veterans.

John McCrae died of pneumonia on January28, 1918 at age 45.  He is buried in the Commonwealth Graves Cemetery in   Wimereux,France.

Note the names come from the booklets Marion MacMaster, a much loved teacher and historian from Laggan.  She was also a member of this congregation.

There are 54 names on the list.  What a commitment to service this congregation has made considering its size.

One of those on the list is my father.  There are fathers of members of this congregation, grandfathers, uncles, aunts, cousins, neighbors and friends.  Many veterans returned to this area to farm.  We thank them for their dedication and efforts in building up the wonderful agricultural community we live in.

Those Who Served World War 1

Those Who Served World War II

We honour those who have served both past and present in times of war, conflict and peace by observing

From John 15:  My command is this:  Love each other as I have loved you.  Greater love has no one than this:  to lay down one’s life for one’s friends.

As Marion put it in the forward – St Columba owes great gratitude to those remarkable people who took on the task of defeating Canada’s enemies.

I want to close with a prayer that was scratched out on a prison cell in Cologne during the Second World War.

The Act of Remembrance

A warm welcome is extended to everyone to join us in worship.

Worship for the months of September to December will be at 9:30 AM.

St. Columba held its annual Remembrance Sunday Service on November 6th to remember and give thanks for the men and women who have given their lives over the years in protecting our country and values. Phyllis MacMaster read the honour roll which can be viewed by following the link, Honour Roll .

We remember with gratitude and respect the dedication and service of all those church members who have gone on before us, leaving a rich heritage which we continue to preserve. Please join us in viewing this short video.

Our Presbytery has appointed the Rev. Robert Adams as Co-Interim Moderator for our Pastoral Charge to share Interim-Moderator duties with Rev. Jim Ferrier. Rev. Adams is the minister at St. John’s Presbyterian Church in Cornwall,

Search Committee Update – the Search Committee has received the Presbytery’s Policy for moving from full-time to part-time ministry. The Committee in conjunction with the Sessions, will be taking some time to review and consider this step in our pastoral charge’s life and ministry. 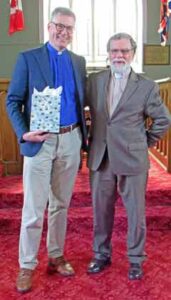 Rev. Lockhart provided an animated and engaging message which we would like to share with you. The recording of his message can be found by clicking on Rev. Lockhart Sermon at St. Columba. The recording begins with the children seated in front of Rev. Lockhart for their story, followed by prayers and the sermon. Enjoy!

Please make a note of these times for worship, and pass on the word to family and friends.

If you are unable to attend our services, please direct tithes and donations to the St Columba church at the address below.

Donations can also be made by Interac E transfers by signing into your online banking account or mobile app and using the email address stcolumba@xplornet.com .

Please provide in the ‘message’ area of the E-transfer the following information:

Similarly, donations to our Cemetery Fund can also be made by Interac E-transfers by signing into your online banking account or mobile app and using the email address stcolumbacemetery@xplornet.com .