It was in 1794 that the first Presbyterians who came from Glenelg, Scotland settled in the Township of Lochiel. The congregation was formed in 1819. Shortly after the arrival of Rev. John McLaurin in 1820, a wooden church named the Lochiel Church of Scotland was erected. In 1862, the planning began for a new stone edifice which was dedicated in 1869 and renamed St. Columba Church. Although the Presbyterian Church in Canada was formed in 1875, it was not until 1911 that St. Columba decided to become part of the national church. St. Columba was the second last church in Canada to secede from the Established Church of Scotland.

For the special service on June 2nd, the church was decorated with various tartans in keeping with the strong Scottish heritage in the area. Historical artifacts loaned by church members and early church documents were on display. Individuals dressed in period costume added to the ambience of bygone days. On view at the front of the church and set on an easel was a beautiful oil painting of St. Columba Church painted in 1947 by Stuart McCormick.

Rev. Jim Ferrier, Interim Moderator, brought greetings and conducted the service. Guest speaker was Rev. Jean Franklin Harms who delivered the Message: “I Will Build My Church.” She attended St. Columba in her formative years and now lives in Hamilton. 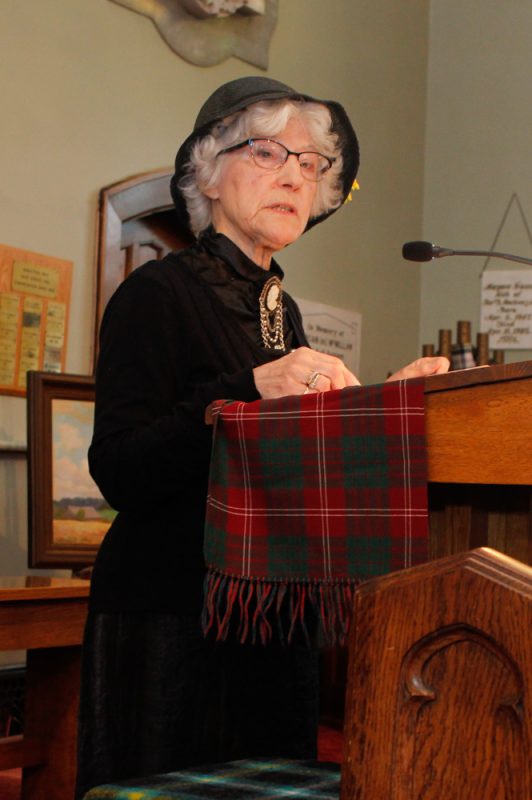 The Message delivered by Rev. Jean Franklin HarmsFormer student minister at St. Columba during the period 1960-1963, Rev. Leo Hughes offered the Prayers of Adoration and Confession.

In keeping with the tradition of the congregation’s forefathers, people stood to pray and stayed seated to sing, several of the hymns being without accompaniment. The Twenty-Third Psalm was sung in Gaelic with the congregation echoing the words of precentor Darrel MacLeod while Donaldson MacLeod said the Lord’s Prayer in Gaelic.

This hardcover commemorative book illustrates the important events in the church’s history and includes information on the various organizations within the church such as the Ladies’ Aid Society, Sunday school and Young People’s Society. It contains a list and description of In Memoriam gifts, artifacts, banners and plaques and records the names of the men and women of St. Columba who served in WWI and WWII. Also featured are the memories and pictures of past and present church members, some the direct descendants of the original Glenelg, Scotland settlers. The dedication reads as follows: “The past 200 years is rich with the history of our Scottish ancestors. This book is meant to be a written and visual testament to their faith and perseverance as they settled the area and developed the agricultural roots of the Kirk Hill community. In her book, Up and Down the Glens, Dorothy Dumbrille wrote: ‘These Scottish people brought to their task a tenacity of purpose, a resourcefulness and courage that were rooted in deep religious faith. Loyal to their principles, they never failed in their response to duty.’ We thank God for their labours. This Book is dedicated to the men and women who have contributed to the spiritual well-being of the people who have called St. Columba home for the past two centuries. May the goodwill and fellowship of the church community continue to be enjoyed by future generations as they worship together under the Gaelic words Tigh Dhe (House of God).”

An ‘international link’ was formed as the congregation welcomed Jean Campbell Macrae who travelled all the way from Glenelg, Scotland to attend the event.

It was through researching a former Glenelg minister that Jean saw the notice of St. Columba’s 200th anniversary celebration and “kinda invited herself.” She had visited St. Columba some 54 years ago. Sporting a white cotton bonnet and tartan shawl, Jean gave an interesting talk about the Parish of Glenelg. She joked that she hoped it wasn’t her who brought a Highland Scottish mist to the celebration. The drizzle mattered little to the large gathering seated in their warm pews other than to cancel a planned group photo on the church’s steps after the service.

The service was a music-filled affair featuring the Campbell Trio, Gabrielle and her talented children Rachel and Noël, who brought a gasp of appreciation and an uttered “Wow!” at the close of their beautiful rendering of the hymn Great Is Thy Faithfulness. A highlight was Bill Connors’ accompaniment on the church’s antique reed organ to Blest Be the Tie that Binds.

After the service, the membership headed through the rain and across the lawn to a large tent where tables and chairs seated the several hundred people attending the anniversary lunch consisting of a long banquet table covered in sandwiches, vegetable platters, dainties, desserts and a 200th anniversary cake. Adding to the festive atmosphere were the sounds of the pipes and drums of the Kirk Hill pipe band, descendants of the original settlers, who gallantly played in the rain. The crowd then returned to the sanctuary to enjoy an hour-long splendid performance by the Campbells. To end this memorable day, a slideshow of colourful photos collected from over the years was presented.

Two earlier bicentennial events included a visit on May 12 from the Rev. Daniel Cho, Moderator of the 144th General Assembly of the Presbyterian Church in Canada and a sold-out Victorian Tea and Fashion Show held in the Dalkeith Recreation Hall on May 18.